I was introduced to writing for children very late in my life. In the early days of my childhood, apart from reading, there were other avenues for fun and learning. Perhaps, I was lucky that there was no competition from television at that time. While growing up in a village, my exposure to fun and entertainment came through a number of story-telling forms that existed. I grew up in a farmer’s joint family with 15- 20 people living together. Everyone around was a storyteller. I heard stories at a hair-cutting salon, a katta under the huge pipal tree, in local folk performances, and from keertankars(discourse-givers) who would come to our village to perform. The affectionate uncle, Babumama who ran a hair-cutting salon had a performance group playing Sangya Balya, a folk form from the Maharashtra-Karnataka border area. While he would play the comic character of Sangya, we would watch his performance from the first row in the audience. He would provoke us, in his inimitable and energetic style, to be part of his performance and invite us (as well as the adults) to rediscover the world around us. It would amuse me to see how the same person sang, recited dialogues on the stage, came to my house, talked to me affectionately as well as cut my hair in his saloon while telling stories. Children were as much part of that culture as adults. I don’t remember any attempts made to see the world “through children’s eyes”. I was given no special treatment as a child, except that I, along with other children, was given the front row to watch a performance!

I would travel to my maternal grandparents’ town with my mother during holidays. The town bus stand had a small newspaper-stall. In fact, it was a stationary shop selling all kinds of things. About half of it was given to books and newspapers. For me, it was the treasure house of ‘yellow books’ in Marathi printed on cheap papers. Sold for a rupee or fifty paise, the books had fascinating titles like Magical Lantern, Flying Carpet and Flying Horse. The fantastic stories of a wicked old woman and the amazing picturesque kingdoms in it would hold my breath. My mother would buy me a bunch of such books on our trip to the town and I would read them over again. Over and above, in my trips, I befriended Chandu, the son of the tenant living in my grandparent’s house. He introduced me to a local library in the town to borrow picture books on those who shed their blood for the nation. We also subscribed to a children’s magazine, Kishor. In the varandah of our house, we used to have readings of short stories and poems published in Kishor.

Marathi literature written for children in different forms has a long history. It begins with Balbodh, a magazine edited by Vinayak Kondadev Oak in 1881. Before that, there were a few published books but they were translations, like Sadashiv Kashinath Chatre’s translation of Aesop’s Fables that was well-known. We also had the P K Atre alias Acharya Atre edited Navyug Vachanmala (Readings for the New Age) especially for the comprehension exercises. Popular even today, the vachanmala was edited to cultivate reading habits and literary tastes among children.

Two storybooks, simple and sweet, have left a lasting impression on the middle class Marathi child:Shyamachi Aai (Shyam’s Mother) by Sane Guruji and Gotya by N D Tamhankar. Written in 1953,Shyamachi Aai, is a lucid narrative of the joys and sorrows in the life of Shyam, the protagonist and the writer himself, Sane Guruji, a veteran socialist thinker and a staunch follower of the Gandhian ideology. Today I may not empathise with it because of its overbearing didacticism. But, it has been a major influence in Marathi middle class upbringing. Tamhanakar’s Gotya is also penned with a didactic approach but it has a lighter side to it than Shyamachi Aai. As a child, I enjoyed the main character Gotya’s wish to enjoy and have fun, his naughty and mischievous nature. Most of the stories that I read were written, more or less, from an approach that children were to be spoon-fed - until I came across a wonderful fictitious character called Chimanrao.

Born in 1892 in Pune, Chintmanrao Vinayak Joshi, popularly known as Chi Vi invented two fictitious characters, Chimanrao and Gundyabhau and they captured the Marathi middle class reality with compassion and imagination. Deviating from the obvious preachiness in children’s literature, Chi Vi Joshi’s characters revel in a celebration of life offering diverse perspectives in simple Marathi. Therefore, it is not surprising to find that Chimanrao is widely read even today and attracts aficionados from across the age groups.

It is important to remember that none of these writers have written exclusively for children. They wrote for all. As the base of education widened and literacy increased after the 1970s, a demand for children’s books also grew. A new generation of writers with a sense of commitment came forward to write for children. Additionally, as Marathi writers were exposed to varied kinds of narrative forms and writings from across the world, it changed the course of their creative writing. This change was clearly visible in the writings of Bha Ra Bhagwat (1910-2001). What fascinated us were Bhagwat’s stories of adventure and fantasy in his novels like Bhutali Jahaj (The Possessed Boat), Bramhadeshatil Khajina(Treasure in Burma) and Khajinyachya Betawar Sanju-Raju (Sanju and Raju on Treasure Island). Most interesting was the character he created, Faster Fene: a brave and daredevil boy. He, in the style of Mark Twain’s Tom Sawyer, would roam across the countryside with his dashing expeditions in search of buried treasures. We dreamt to be a jaanbaaz like him and to have found a buried treasure in the backyard of our house and school.

While fiction was the main choice of our reading, songs and poems also charmed us. Some of the most beautiful poems were introduced to us by our schoolbooks. They provided a space for young readers to reflect upon their lives and fantasies. The popular medium of Akashvani (All India Radio) brought in a different dynamic to our reading through its programme called Balvani. The especially reserved half hour of Balvani would broadcast poetry recitations as well as stories written by children and for children included in our schoolbooks. The programme would also play popular songs like Mamachya Gavala Jaauya (Let us Go to Maternal Uncle’s House) sung by Asha Bhosale. Balvani enabled a better association with literature than simply reading stories on our own. Some poems like Balkavi’s Phulrani(The Flower Queen) and B R Tambe’s Ata Gatti Fu Dadashi (Now, I won’t talk to brother) became household songs.

In the late 1960s, especially with the New Movement in literature, Marathi literature saw young poets writing poetry with an enthusiasm not seen before. The mysteries and anxieties of a child’s world were being expressed through metaphors and images unique to the world of Marathi readers. Govind Vinayak Karandikar (1918-2010), popularly known as Vinda Karandikar is one such extraordinary example of writers who put children’s world not in isolation but as part of the adults’ world. Every book written by him for children is full of surprises. He does not present a monolithic childhood of obedience and discipline. Vinda’s poetry amuses the reader with the ways in which it recreates a child’s world in genuine and rhythmic language. He allows a child in his poems to look at people and happenings with mischief and compassion. Importantly, following the child’s worldview, he experiments with narrative forms in his literature by breaking with the conventions of closure (‘happy ever after’).

Children today have lots of distractions because of video games, the Internet, television and games on smart-phones. Even so, interestingly, children’s writing in Marathi has been proliferating in the last few years. Child-centric parents, careful of what their child should read, are flocking to bookshops. Despite the fact that a large part of society is still deprived of basic education, there are many more book-buyers owing to the growth of the middle class in Maharashtrian society. A range of new books in different forms are being written by writers like Rajiv Tambe, Dilip Prabhavalkar, Prakash Narayan Sant and Madhuri Purandare. Although the weepy and preachy feature of literature for children has continued to exist through our reading lists, the literature has also moved toward exploring experiences unique to a child’s life and a more realistic world. This new generation of writers has enriched our reading experience with their nuanced understanding of children’s emotional needs, innovations in writing style and fresh content. The recently published two-volume work, Vaachu Anande (Let’s Read with Joy) meticulously co-edited by Madhuri Purandhare and Nandita Wagale is one such example. With an interdisciplinary approach, Purandhare and Wagale have diligently compiled reading and visual material for young readers of different age groups. Such new endeavours reinforce a collective faith that a reading culture that enables children to grow will survive.

(This short essay is written for a proposed book, tentatively called as 101 Indian Children’s Books We Love! (Ed. Anita Roy and Samina Mishra) to be published by Young Zuban, Delhi) 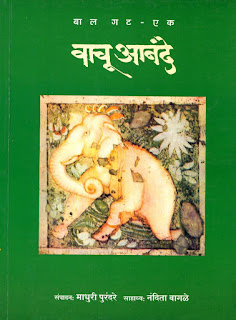 Aruna Giri said…
There is no mention of Sumati Paigaonkar's name in this essay.,one of the writers to get 4 awards from the Centre and 4 from the State Govt.for her books for children .President of the First Bal-Kumar Sahitya Sammelan in Maraathi in Solapur, she,apart from her original books,translated Hans Andersen and Grimm's fairy tales in Marathi
4:39 AM

Ashutosh Potdar said…
Thanks for the response. This is my response to children's literature. I am sure there are many other interesting writers I am not aware of. Regards.
7:42 AM