On the reading of 'The Maids'/The Bridge Chronicle 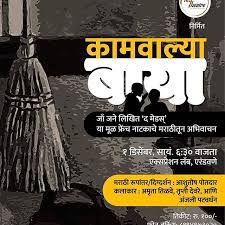 The underpinning of all the political and social turmoil that is brewing around us can be attributed to power play and power dynamics. At a time when the hitherto voices of the fringe have grabbed centre-stage, there is no better time to get ourselves acquainted with Jean Genet’s powerful play based on his play, The Maids.

An important writer in post-war Europe and France in particular, Genet’s plays have shaken Europe for its politics, its form and the realistic representation found in his writing.

The rehearsed readings of his Marathi adaptation called Kaamwalya Baya, will be staged on Sunday, December 1. Adapted by Ashutosh Potdar and performed by Amruta Tilwe, Trupti Devre and Anjali Patwardhan, the Tea4Theatre production, features three bold and poetic female characters.

Potdar first read the play in 2004-05 and later adapted it in a Kolhapuri dialect of Marathi. The MA students of Lalit Kala Kendra Gurukul of Pune University performed it back then.

“I decided to work on it again, because in the changed scenario, the play remains very classic and contemporary. It’s a long one act play and it’s a play within a play. Kaamwalya Baya is the story of two sisters who work as maid servants. Once when their landlady is away, they start playing a role game. Sometimes they are the landlady, sometimes they are the maids,” says Potdar.

In the game, the two women role-play class, gender structures. Genet creates stereotypes in his writing, with the characters of the maids and the landlady, and then sets about to topple these structures.

“In the middle of the role play, the maids hear the telephone ring and then they stop their game. Also, their owner returns. The maids want to kill her, but they are not able to. The owner leaves and the two resume their game. One sister represents the dominant, and the other the subservient structure. There is reality and also absurdity in the play,” says Potdar, who teaches drama and literature at FLAMES University. 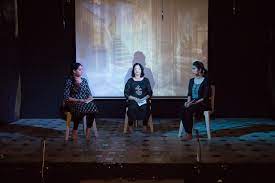 Jean-Paul Sartre, a French philosopher, had speculated on having adolescent boys playing the maids in this play. Potdar agrees that it would have been fantastic to have men play/perform because they could have experienced what is patriarchy, class structure.

However, three very diverse women are enacting/reading out Kaamwalya Baya, and Potdar is quite happy about it. “It’s very important to work with people coming from diverse backgrounds. These three women are really passionate about theatre and live reading of plays. They were not familiar with Genet and his politics. In fact, it was important for all of us to engage with Genet’s writing, through this script. While rehearsing we are trying to understand Genet’s writing and how he topples the structure. That is taking a significant time.