Watching the NSD Repertory’s production of Ramu Ramanathan’s Comrade Kumbhakarna directed by Mohit Takalkar has been both exhilarating and very instructive. Comrade Kumbhakarna is a second collaborative work by Ramu Ramnanthan and Mohit Takalkar after the Kashmir Kashmir performance. As name of the play suggests, Comrade Kumbhakarna is the ‘punga’ taking political play; not a new genre for Ramu. He has been writing, in his words, “everything that helps me ask questions and take a ‘punga’.” Mohit too has taken a ‘punga’ by attempting his hands at this genre though not largely like Ramu. In his Aanandbhog Mall, characters muddled in the caste hierarchies, swap barbs about one another’s pretentious politics. Certainly, Comrade Kumbhakarna once again takes a ‘punga’ with its poignant comment on power politics in India. 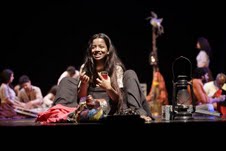 In the genre of political play, there has always been a ‘risk’ of submitting theatricality to social or historical issues raised in a performance. The audience might consent the submission depending on clearly stated intentions behind performing that play. It seems that the Comrade’s intention is to perform theatrically and so it does. But, also, it reflects on the socio-political context poignantly; better than any other so-called issue based political play would do. In fact, Comrade Kumbhakarna strikes balance between the two. On the one hand, it plays with history and politics no longer in innocent ways and, on the other hand, it refuses to surrender its autonomy as an art work. There is acceptance and denial of history as well as energy, playfulness of theatre. In this sense, it offers a sense of the presence of the past but that can be known only from its performance.

The play begins with Kumbhakarna telling a story of his life, of his parents, of sisters and of a traveling theatre company he is part of as an actor. The multiple story lines in Kumbhakarna’s life are webbed together. If one line begins with Kumbhakarna of the Ramayana the other line has a link with a Kumbhakarna of contemporary time whose poor mother decides to give him his name so that he can sleep for six months and not ask for food. The performance is a non- linear storytelling and it is not new in the context of contemporary practices of performing arts in India. However, the Comrade’s specialty is in its exploration of nuanced ways of telling a story. It identifies imaginative ways to display different facets of Kumbhakarna by assigning different story tellers within the narrative. Interestingly, Kumbhakarna also becomes one of the narrators of his own story along with other narrators from a stock of available characters on the stage. Unlike several other non-linear contemporary performances, Comrade Kumbhakarna doesn’t stop merely at fetish of narrating personal stories and memories of one’s individual life but offers self-reflective mode of locating characters and their stories within their specific socio-political context. For instance, Kumbhakarna’s interrogation by two sarkari babus: Tripathi and Singh. Enough to scare the State, in their search, the babus find a towel, a toothbrush, some talcum powder, a black shirt belonging to a little boy, a bus ticket to Cuddalore alongwith Periyar’s speech about Ambedkar, Ambedkar’s essay about Phule and Phule’s note on slavery and, an unsigned letter about famine in Kumbhakarna’s hauling bag.

The actors on stage physically enact cross-currents of desire, contempt and longing connecting different threads of multiple narratives. The graciously performed Ramayana scene for lepers is an example of genuine theatre. Offering kaleidoscopic view of the Ram-Seeta scene, the play rips off standard ways of looking at the heroics of the Rama-Seeta narrative. The Comrade performance keeps playing its game between the boundaries of actor and character, play and real, past and present and so on. Although the character playing Kumbhakarna’s mother is bit exorbitant, Ajitsing Palawat and Navinkumar Thakur playing the young Kumbhakarna and the grown up Kumbhakarna alternating between the role of theatre company actor and Kumbhakarna diligently perform different shades of both the characters. Complexity gets multiplied as the team of rest of the shrewd actors submits itself to the play’s demands with mesmerising songs and visual sequences. Hence, at the first sight, a simple-looking drama full with songs and dance turns to be a space of testing politics and its virile combination with theatre indeed. In this, the audience does not fail to give fulsome appreciation to a knifelike comment of a sarkari babu. He snobbishly says that if we go with the State’s logic of Hindi as the national language being the single largest language, “the national bird of the country should be the crow and not the peacock”.

For Comrade Kumbhakarna’s performance magic to work fuller, one has to keep herself open to read and re-read the existing narrative traditions of the Ramayana. More importantly, the play demands the audience’s participation in singing “a song about Lord Ravana, the straightforward and right thinking and noble.” Over and above, the narrator protagonist “loves Kumbhakarna” and “ever since he has heard an audio tape which had Periyar’s version of the Ramayana”, he “dislikes Lord Rama.” Politically, it is challenging task to dislike Rama and adore rakshasas as “the police has accused (Kumbhakarna’s) father of inciting violence and propagating the Asura ideology of… power through violence, through a bow and arrow and a Kalashnikov.” Brightly acted by an ensemble of the NSD’s Repertory Company, Comrade Kumbharkana treads the path of re-interpreting the Ramayana(s) without dragging, except in the end. The slightly lengthy end part of the play in which actors of the traveling company get ready for the next show, albeit brilliantly decorated with visual compositions, was needed a sharp tightening in order to take forward the Comrade politics.

Kumbhakarna’s father is inspired by ‘Perriyar saar’ or Periyar E.V. Ramaswamy, a cult figure in Tamilnadu who flagged Self-respect Movement in 1920s to protect rights of the people at margin. Presenting a granular sense of history the national and regional politics especially, Tamil; the performance moves ahead exploiting various possibilities of a folk form, referring to the Panipat War, Indira Gandhi and the current politics of Sonia and Manmohan. Interestingly, while setting itself within the South Indian politics of the bygone era, the Comrade performance also presents with the inter-textual possibilities of forming links with the contemporary identity politics in other states in India. For this reason, one wouldn’t be surprised at a Pune based Mohit Takalkar’s choice to direct this play. 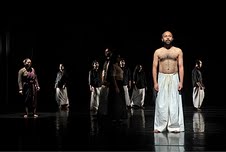 Satire as a mode allows Comrade Kumbhakarna to emerge as a form of rupture with the past as well as other threads of contemporary politics in India. It does indeed mark the difference from the past, the past of Dravidian politics. Its intertextuality with the Ramayana simultaneously works to affirm the connection with the past and re-visit it through one’s own links of local context. Ramu sets it, in Foucault’s words, ‘within the archive’ and through his aesthetic autonomy; Mohit creates the link to the work of empirical reality. In this, satire in the play comes not to destroy the past but both to hold the past and to refer it for the present needs. The play’s strength is in its maintaining a kind of detached perspective. Being non-partisan, the performance goes onto to performing what's going on in the director’s head and around. It performs an ideology without being only ideology play.